Entrepreneurs, nowadays, have access to more efficient solutions to rapidly create adapted and innovative products. How can you serenely navigate amongst these varying disruptive technologies all the while taking advantage of the competition game? Open source initiative, crowfunding platform, incubator, and accelerator: how do these tools work around the creation of a project?

The centralised or decentralised aspect of a service is a question of perspective. Its perception depends on the observer, but more so on the observed component. For example, the Youtube broadcast service could seem centralised (since it is owned by Google, who makes its servers available) as well as decentralised (because it is the web user who creates his own content). An infinite number of paradoxes can be illustrated without showing the superiority of one aspect over another. Going from one extreme to the other is not desirable since the synergy of these two poles is genesic (the same goes for other forms of dualities, such as private/public, open/closed, scientific/religious).

It is possible to juggle between these two different views to combine their strengths and their weaknesses.

Decentralised economy can be defined as the ensemble of methods that open the possibility to create and distribute value without using the traditional actors (salary, bank, State). From one day to the next, I create a product that I commercialise. I can simply become my own boss, enjoy a production tool and reach both local and international markets, as needed. This economy of defiance started to become popular during the 2008 financial crisis by depending on information technology (smartphone, 3G coverage, online payment). The best learning examples today are Airbnb and Uber for the type of service rendered as well as the way that these companies emerged.

However, this new reality rest on several intertwined and interdependent systems. Their first motor is the following: 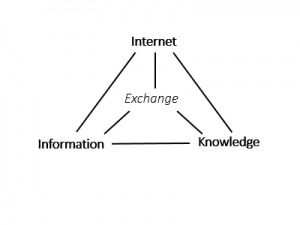 The information circulates virtually freely, almost anywhere and at a relatively low cost. Through the exchange of information, supported by Internet infrastructures (instant messaging, email, social networks, websites, wikis, tutorial videos, etc.), knowledge structures itself all the while feeding new interactions. What is observed here is a recursive cycle phenomena. Next to it, collaborative work tools develop: you can build and exchange simply with associates or interact with all of the planet’s connected experts. 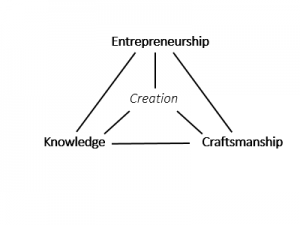 By relying on knowledge made available by Internet communities, an entrepreneur can position himself and fulfill the market’s expectations, then become known. You therefore move from contributor to service provider status. You submit your prototype (or MVP) to critics, you integrate the feedback, and you let yourself be transported and proposed to by evolutions: a beta version emerges and matures. Moreover, the creator can be supported in his adventure by investing reasonable sums through specialised services suppliers: fiverr.com, freelancer.com, to ask for a hand with marketing or the visual aspect of the product. 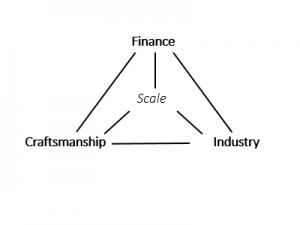 The final step is to transform the product is to upgrade it from small-scale artisanal production to an industrial dimension. The means are no longer the same. What is needed is to justify a return on investment and a certain level of profit. The goal is to initiate the revenue pump at the contact with investors, venture capital companies (or simply through the community-client-actor’s enthusiasm via crowdfunding campaign). The creator also has the possibility of defending his vision and refining his economic model during specialised events, such as start-up weekends or pitch contests. These new financial means allow to combine the product with more expectations and demands (production cost, security, adapting to different markets, etc.). And finally, in order to be supported daily, the entrepreneur can serenely structure his first start-up in accelerator-incubators.

And so on. These mechanisms will start-up and feed themselves again and again.

These days, the French government institutions make a huge effort to mentor, restrain and limit this decentralised economy (all the while pretending to support entrepreneurship). But, the mutually profitable individual/private interest partnerships create themselves spontaneously without a third-party intervention. The State, by legislating and trying to forcefully introduce installed economic actors, becomes, de facto, the best opposition to this booming development.